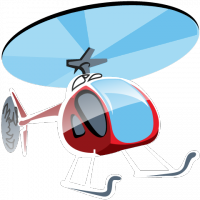 Blackberry is an out-an-out business device and although its high on security, productivity and connectivity, sometimes there is just not enough of the entertainment factor thrown in. These troubles, however, could just be forgotten with Chopper Pro, by far the best and most addictive game on Blackberry.

Chopper Pro was created by AppsForBB.com, a developer that has quite a repute on Blackberry App World with a high inclination towards utility apps, but don’t worry as this little gem will definitely not disappoint.

The game is as simple as counting 1,2,3. The main objective handed over to the player is to guide a helicopter to the maximum possible distance. Well, though the objective is simple, the gameplay not a walk in the park. The Chopper sways down on its own will, as if its running out of gas you better watch out.

Control and concentration is the key factor to mastering the game, though frustration might seep in for the non-gamers. For all of the hardcore gamers out there willing to put their ego on the line and fight till the end there is a light at the end of the tunnel. Overall, Chopper Pro is an exceptional game for Blackberry handsets. So while commuting, instead of social-networking or using BBM; users have now something else to shoot-up and control.