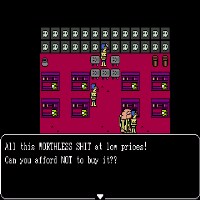 If you are into the weird and crazy, then you’ll definitely enjoy playing Space Funeral. It’s a Japanese RPG that centers on the unusual and the insane.

You play Philip and you have a sidekick named, Leghorse (don’t ask why) and you set off in an adventure to find the lost City of Forms (will explain in a bit.) On your way, you encounter all sorts of monsters and creatures, from ghosts, goblins, hedonists, lions, gross out monsters and even Dracula!

Filled with lots of blood and weird caves, plus a cool soundtrack that pits electronica with Japanese noise rock; this game will blow your mind away. The graphics are quite original and pretty colorful as well adding to the trippy vibe of the game. Essentially a pretty unusual but interesting piece of RPG that you can play in a little over 2 hours. Have fun and try not to crazy.

Okay, now I know that most of you love your RPGs when they have more than one characters, in-depth storylines, cool graphics and gorgeous cinematics. Let me tell you now, you will not find any of that here in Space Funeral.

The game is essentially a very disjointed, out-of-this-world adventure where the story is just so far out and nonsensical that in its insanity it actually makes sense. You’re probably scratching your heads right now, but stick with me here. Even though the game might look very untypical of what you know as RPG, it actually contains a lot of RPG elements. Just a lot more twisted and more disturbing.

The game starts off with you getting kicked out of your parents house. Not because you did anything particularly wrong, but you suddenly just wake up and have your dad tell you that him and your mother thinks you should leave. Afterwards, you set off on a journey for the City of Forms, which is just the place where all things are formed. (Yes, it’s that literal.) As you drudge along your way, you find yourself encountering a barrage  unusual, creepy and downright ugly creatures.

The combat style for the game is quite similar to what you would expect in mainstream works like Final Fantasy. Of course, beating the enemy is a piece of cake but do expect an occasional surprise. There are enemies that will require a different fighting technique in order to defeat them. Like all its other zany elements, the game seems to have embraced the various 90s RPG game fighting techniques and rolled them into this one big rubber ball.

Another gem that’s found in this game is the soundtrack. Yes, just like the storyline it doesn’t make much sense. It’s arty, it’s creepy and it’s also awesome. If you’re wondering how such a completely unhinged game can be so good, well, try playing it and see for yourself.

As long as you don’t mind seeing faces in almost every living thing that surrounds you – cacti, rocks and trees- or that your companion is essentially a horse with no head and all human legs; or even if you go deaf because the music is essentially nothing but the guitars screeching non-stop; then this game was definitely made for you.