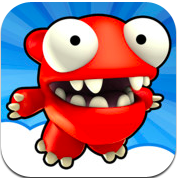 It seems casual gaming is the new order call for the iOS fans. Move over HD gaming it is time for Mega Jump to invade the iPhone and iPad. Mega Jump is a fun, casual game with pleasing visuals and some very cute characters thrown-in here and there.

Created by Get Set Games, these developers are a trusted name for casual gaming within the iOS platform and Mega Jump to them is what Angry Birds is to Rovio.

it could be said that Mega Jump is one true contender to the Angry Birds franchisee. What really sets Mega Jump apart from other games is the fact that it does not try to imitate the other big-wig casual games and creates its very own niche segment. The graphics of the game are very neat and make you smile every-time they are fired up on the device.

The whole objective of the game is to collect as many coins as possible and all this is done without touch the device screen. Yes, for players who own smartphones with Gyroscope, this game will be your best friend. The game packs-in some very interesting power ups; from making your character boosts with purple gas for faster shoot up through the sky, transforming the character into a balloon, coin magnet, zap enemies with a power shield, hovering around with an action umbrella, to some extra air garnered with jump boots.

Like every other game, even Mega Jump sports its own share of obstacles and enemies. So while you soar high in the skies, be sure and aware of killer items and monsters doing their best to stop the game immediately.

Overall, Mega Jump is a must have game on all supported device as it does not cater to only a particular segment of the gaming society. It is meant for one and all. Mega Jump is also available in the Android Market, but the updates are much more frequent on the iOS platform and so are the levels. Nevertheless, a fun game for all ages.