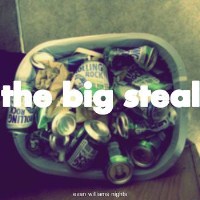 Evan Williams Nights is the debut compilation for Middle England band, The Big Steal. The entire album is self-produced and was written over a certain period when the artist was calling Virginia his home.

Comprising of songs that tackle various topics like “running, self-loathing and the magic of American lawn games;” the album is a 10-track record that has its merits.

With carefree alternative pop punk tracks, you’ll find the album good company for days you just want to lounge around and enjoy the sun.

Named after one of the founding members of Twitter, Evan Williams Nights is no tribute record but it has enough merit to warrant a listen. Composed of upbeat tracks, the album features 10 cuts. Much of the songs are typical punk rock affairs with fast beats, steady drumming and a dedicated British drawl.

Tracks like Right. I’ll Start Playing Properly Now.; Chinos, Loafers and Misogyny; and Stefs E-mail can serve as representative tracks. They provide the listeners with a good idea on what to expect from the rest of the record.

The album isn’t groundbreaking but you’ll find that it’ll serve as good company especially if you want some upbeat tracks to serve as soundtrack to your day. You can download the full album over at BandCamp absolutely free. Check it out and enjoy.