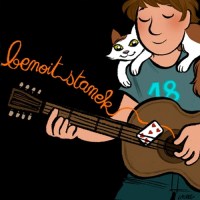 Soothing folk pop album that takes you on a journey to the French aisles. With beautiful acoustic guitar and soft melodic strumming, this album makes you feel as if you’re sitting somewhere in a gorgeous French garden, enjoying a warm, sunny day.

Benoit Stanek is an 18 year old student at the Lycee Louis-le-Grand in Paris, considered to be one of the most demanding secondary schools in France.Benoit Stanek creates melodic acoustic folk pop that’s infused with piano arrangements here and there. Although the French accent takes a bit of time to get used to, the vocal work suits each track. 18 is a record that marks the artists transition into a major. This album was recorded on July 2009 and the majority of the tracks were written from December 2007 until it was recorded in July last year.

Each track, according to the artist, was recorded in his room and only 13 (out of 20) of his personal as well as listener’s choice made the cut in the album. The rest of the tracks will be released on his personal blog.

Some of the more interesting cuts on the album include the lyrically sad cut, “Billy” as well as the warm, jazzy acoustic track, “Lila.” “Superhero” is also another reflective track that focuses on a young person’s dreams or goals in life and how he eventually loses it as he grows older.

Stanek admits that this is his first foray into folk pop English cuts, but from the sound of things, he seems promising. Each track bears a soul that’s easy to relax to. As mentioned, it might take some time to warm up to the vocals but in the end it does grow on you. Each track becomes a deeply, melodic and intense acoustic performance from a very personal viewpoint.