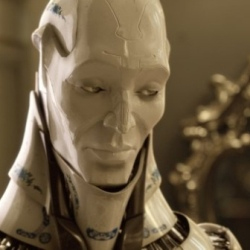 This sci-fi film set in Russia is one testament that anything belonging to the genre may not just be about a thrilling display of robots and time machines as products of humans and science and technology.

The Gift got an excellent direction from Carl E. Rinsch as he first set the mood of the story in a quite silent and menacing way – with a man holding the gift, extravagantly wrapped in red and gold, and travelling towards a house where the peak of the action finally begins.

The climactic action–especially the “chase sequence”–was rightly justified by the shots taken for the film. Pacing was also perfect; each scene was given the right amount of screen time, allowing the viewers to connect to every moment of the short.

Aside from all these, what makes this short even greater is the story itself – its focus on what the gift signifies and its effects to the characters in the story as well as human greed. Another interesting thing the filmmakers did was to give the robot its free will and ability to feel emotions. Consequently, its decisions and actions deem crucial to the plot of the short.

All in all,The Gift gets an A+ for both quality of design and content.