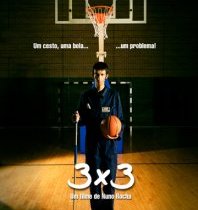 3×3 by the talented Nuno Rocha delivers us a quick laugh to brighten up those gloomy days.

Awarded and selected by numerous film festival both in Spain and other countries including a recent stint at the 27+One Film Festival in Russia, this short comedy is a splendid mix of wit and great craftsmanship.

The film opens with a night watchman who spends time practicing on a basketball court. He shows his expert abilities to a simple janitor, who then uses an unlikely way to perfect shooting a ball into a basket.

Even without dialougue, the film succeeds in telling the a humorous story just by the right casts, scene cuts, and music. I love how the story perfectly fits with the 5-minute runtime. If the story was longer, it will not be as funny as it is now.

Performance wise, the actors has showed a brilliance in communicating to the viewers by mere actions and facial expressions. The absence of lines also made more room for tension and anticipation and did not add cheese and cliches in the film.

All in all, 3×3 is the perfect breather to chanel some postive vibes. So download, press play, and laugh your heart out.