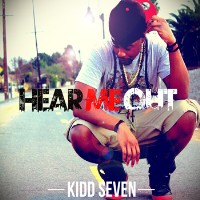 Kidd Seven: Hear Me Out

Brought up from Compton and Pasadena, rapper, Kidd Seven shares his latest mixtape in preparation for his debut album.

Hear Me Out was released last April 2012 and comes with 16 tracks. It’s a nice compilation for those who love hip hop and need something to pop on their cars as they drive around.

Filled with great beats, Hear Me Out contains a nice mix of samples and cool laid back beats coupled with good rap skills, to satisfy any listener.

Kicking off the compilation is, Blue Sky. The song starts off strong, showcasing solid mic skills from the emcee. It’s a short track following the intro but definitely welcomes listeners with the appropriate energy for a cool hip hop record. Back Then, comes next and slightly slows down the tempo while featuring a raw, narrative lyrics from the artist. One of those songs where you not only enjoy the beat but also make sure to catch the lyrics.

Although Kidd Seven can definitely go “party loud” in some of the tracks, he doesn’t shy away from the more R&B leaning grooves. You’ll find this in tracks like Don’t Cry and Hear Me Out.

The album is far from perfect, however, a good portion of it is quite polished. You’ll find tracks that’ll become easy favorites. Occasionally, you might find yourself skipping out songs but these are few and far in between. Overall, it’s worth the checkout. Give it a try.