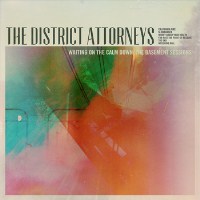 The District Attorneys: Waiting on the Calm Down, The Basement Sessions EP

Laid-back and charming, these two words can best describe the sound of The District Attorneys. Waiting on the Calm Down: The Basement Sessions EP is a short compilation meant to introduce and haul in fans as they wait for the guys to release a full record.

Consisting of a six-piece crew from Athens, GA; they first started back in 2009 playing their form of classic rock. From melodic rock ballads to uptempo indie surf rock affairs, you get a good mix from this little compilation.

These boys know their way around music. From creating catchy hooks, tight lyrics and great instrument work, there’s plenty of fun up ahead with this record.

Waiting on the Calm Down couldn’t have started on a better track than, California Fire. The song is the epitome of beautiful laid-back rock. There’s a nice beat that’s makes you want to soak up the sun and just drop everything to enjoy the day. The vocals don’t take front and center, but instead merges beautifully with the instruments and melody.

It’s followed by a massively catchy, Slowburner; a cut that shines in the record. Again, there’s a summer vibe going on; perfect for lifting your spirits if you’re going through a dreary winter morning. Meanwhile, Far Past the Point of Resolve continuous on with the relaxing atmosphere while The End, takes the band down a quieter route. They incorporate pianos and twangy guitars in this one along with a very slight country feel.

They then cap off the record with a cover of Gillian Welch’s song, Wrecking Ball. Their version isn’t my favorite on here, in fact, I think it could have done better without it. Nevertheless, if you listen to the first five tracks, you’ll realize that The District Attorneys is one band that’s worth noting. Grab the download and take a listen.