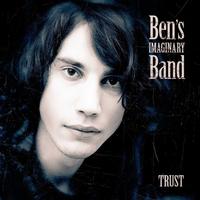 When everything else around you feels like a dream, you end up slipping into your own imaginary realm. And with the help of Ben’s Imaginary Band, it isn’t hard to achieve.

Trust EP is a surreal-sounding album, with hints of melodies which seem to transport you into your own world. The band’s name may be a bit contrasting with the album’s name (Trust + Imaginary seems to cancel each other out), but once you hear it, you’ll definitely appreciate it.

Listening to Trust EP is a whole new experience, and serves as a really great break from the usual pop teenyboppers all over the music industry nowadays. His music is hard to explain and describe though, but once you hear it, you’d definitely recognize a Ben-ish flair in every song.

A fun fact: Ben’s Imaginary Band is not a band – it’s not even a 2-man band. It’s just simply Benjamin Romvari, forming the imaginary band. Here’s a little excerpt from his own blog as to how he stumbled upon discovering his own musical talents:

So, I was six years old, my parents bought a violin from the local buy-sell-and trade, took me to a local violin teacher, and I took lessons from her for just over a year. That was pretty much it for a long time. Say, eight years long. It wasn’t until the age of 15 that I finally decided to try music again. I picked up an acoustic guitar with the same intention any 15-year-old boy picks up a guitar; in an attempt to impress a girl. So I went about learning every song I thought sounded pretty. After learning numerous punk songs and a couple other pop hits, I decided that it was time to start singing. I practiced much during this time.

Well, long story short, a year went by. My parents bought me my first electric guitar, and I decided to write music. So, after an interesting, yet terrifying Halloween, I wrote my first song, recounting the evening’s events. Then, in all its ballad glory, I recorded it the same day using a computer microphone (you know, the ones you use for voice chat.) The end result was a little embarrassing, but, my friends were impressed. So that was enough motivation to buy some low-end recording equipment.

Trust EP in Jamendo only has 5 songs, but the original download in his website has 7 songs. Just by looking at the songs’ titles, you can have a little idea as to how his songs might sound like – magical, ethereal, however you may want to call it. The album is a good lullaby, and yet it’s also inspiring at the same time.

But one thing is for sure, even if we cannot put exactly into words how this album sounds like: it’s worth to put it in your media player to listen to over and over again.

This work is licensed under a Creative Commons Attribution-Share Alike 3.0 Unported License and is available as a free album download from Jamendo.com.