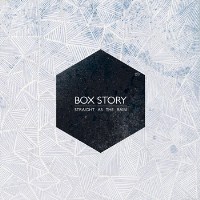 Box Story is actually a solo project started by Laetitia Solimando, a singer and songwriter from Belgium. Initially venturing out with just an acoustic guitar, she decided to add some moody pop elements to her sound with the help of Lhoest Renaud. The sound evolved and she was soon joined by other musicians eventually forming a band and a darker, slightly more alternative sound.

Straight As The Rain EP is the third release from this somber voiced artist. Her first album, The Only Thing I’ll Keep came out in 2006. It was followed by, Hard Way, in 2009 and finally this third one. These three records also chronicle Laetitia’s musical transformation throughout the years; leading up to this EP’s dark and moody slight rock tone.

Starting with Nightmare, the song has that haunting, reflective mood coupled with the singer’s intense vocals. It’s a mid-tempo track that has an alternative vibe right at the middle portion. Featuring skillful guitar playing and a strong sense of direction, the song seems made to accompany your more brooding moments. On the other hand, Away Always is more mellow and perhaps one of the tracks in the record that’s a little more softer than the others. Laetitia’s vocal work is more subdued which is perfectly complemented by simple guitar work that adds to the quiet vibe of the song.

The album is sort of laid back and in the end, there are still more songs that echo an acoustic, melodic pop sound compared to the more rockish side of Box Story. One of those compilations you can play if you need some company on a dreary or gloomy day. It will help set the mood right. Go ahead and grab the download.