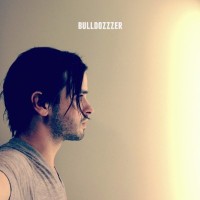 For deep and raw acoustic music, it’s hard to beat the moodiness of Val Emmich. This Jersey city native has released previous albums before and each one features a special touch.

For Bulldozzzer, Emmich keeps his audience on their toes by delivering fresh yet subdued set of tracks that highlights his beautiful vocals and intimate songwriting. You can expect barely whispered singing fluttering over keyboards and guitars.

Apart from being a rock singer, he’s also an actor who has appeared in shows like Ugly Betty and 30 Rock as well as indie film, Fighting Fish.

Without broadcasting it, Bulldozzzer provides tracks that peels back a bit of the curtain in the life of the singer/songwriter. It’s filled with reflective tracks that ask the who and what of life. Coupled with Emmich’s deep, stirring vocals; each track takes on a whole new dimension.

Walking Cane starts the album in a somber, quiet tone. Emmich’s voice rumbles on as it gently flows with the acoustic guitars. Lyrically, it echoes an artists soul as he contemplates moments in life when a simple relationship grows into a dependency of sorts. Good or bad, it’s not for us to judge but for us to merely listen.

Flat and title track, Bulldozzzer, can be found in the middle portion of the record. The former incorporates a slight uptempo beat without really stirring up much of the sand. It’s a low key track with sweet, almost sultry vocal work from the singer. Meanwhile, the latter is a quiet single with powerful lyrics. It’s about a man dealing with his moment of anger and the repercussions that come with it.

Bulldozzzer as an album is beautiful. Those who can appreciate the beauty of quiet indie rock (almost lo-fi) will adore this album and keep it close. The beauty of it is that it’s so understated, you can easily leave it playing in the background all day long. Give it a listen and enjoy!