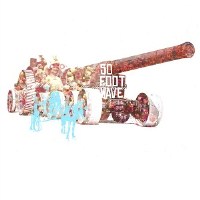 50 Foot Wave: With Love From the Men’s Room

When it comes to free music, it’s hard to say no, especially if you find out that the band sounds great. 50 Foot Wave is one band you might have trouble saying ‘no’ to.

With Love From the Men’s Room is the band’s latest compilation. They’ve consistently offered their music for free under a Creative Commons License, allowing listeners (new and old alike) to enjoy their sound without having to fork over anything. Of course, it would be ideal to show the band some lovin’ by sharing their album or even donating.

This mini record only contains 5 tracks but small doses of 50 Foot Wave seems the best way to go. From the getgo Radiant Addict, opens the album with drums and guitars that’s coupled with Kristin’s unique vocals and slightly biting lyrics. It’s followed by a guitar-driven and Southern rock sounding cut, Grey. Meanwhile, middle track, Free Fall sounds the most radio-ready of all. Its stop and go rhythm, catchy beat and overall charm, makes it one of the easiest cuts to like in this compilation.

Finally, the EP is finished off with the slightly brooding cut, Nobody’s Tar, Nobody’s Feathers with , A Rushing, closing off roughly 12-13 minutes worth of great alternative rock; the kind you don’t really hear much of nowadays.

Overall, the album is armed with songs that you don’t easily get sick off. In fact, it’s the kind you end up appreciating, the more you listen to it. Go ahead and grab the download. If you want, you can also get their entire collection. It should be well, worth it.