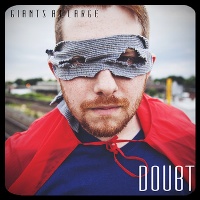 Giants at Large comes from Long Island, New York, a state where a lot of pop-punk bands have already emerged into the rock scene. Composed by four of the coolest and most down-to-earth guys playing their trade to make it onto the big stage, their recently released album entitled Doubt is an eleven track compilation about transition, progress, and mixed emotions.

Timebomb is a minute and a half introductory track that gives a sneak preview of what the band has to offer and it surely delivers to the expectations in the following tracks to come.

135 Syosset wastes no time and instanteously gives us the fast pop swellings common to the punk rock genre. Doubt combines the audacity of their vocalist and talented instrumental playing in the exact amounts of proportions that we listeners find irresistible.

Devils deliver a heavier theme than any of the other tracks in the album because of the rash lyrical singing and intricate guitar and drum-work harmony. Sleep Sound from the title itself is very dramatic and emotional. It starts off really slow which easily moves the listener’s hearts and feelings.

The band did a great job in coming up with a compilation like this. It is important for a genre to have new contemporaries and influences to keep it alive and growing. Giants at Large made its mark in the punk rock scene loud and clear enough; making them a real option in the vast assortment of their kind.