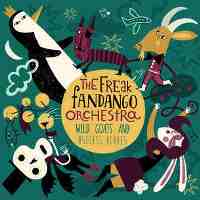 There’s a crazy fun festival brewing and you’re all invited! In Wild Goats and Useless Heroes, The Freak Fandango Orchestra sheds it all out to create a celebration of energy-filled melodies.

Released last may 2014, the nine-track collection was financed through a crowd-funding campaign. The Freak Fandango Orchestra is a Barcelona-based folk/balkan group composed of Noe, Armin, Vitto, Jürgen, David, Xavi, Jordi, and Alfonso.

First stop is Mundo Caníbal, a three-minuter track that brims with a cacophony of trumpets and feet-stomping drum beats. The animated vocals create transports audiences to images of a carnival show.

With heavy folk strings and funky horns, The Gypsy Song will get you moving. It’s an upbeat piece that channels some positive vibes. The playful mix between the raspy/grouchy male voice and sweet female voice paints a pleasurable contrast to the track.

In Boogich Bulgar, stingy harmonica melodies are mixed well with a harmonious festive melodies. The track features a lot of instruments, but still has the restraint to let each instrument shine while not overpowering the others.

Bublitzki ends the collection in a slow intro that slowly builds into a dance, upbeat piece. Grab a partner and let your feet loose in this magical piece.

Wild Goats and Useless Heroes is a sunshine-laden and bouncing collection that will surely jump start your lazy days.