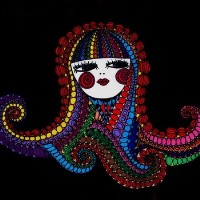 La Monine is the moniker of singer/songwriter, Karenn Gonzalez. With her hauntingly sweet and mesmerizing vocals, she easily conveys emotion and fantasy in her songs.

The singer is based in Chile where she creates her beautiful mellow love songs.  Filled with twinkly, fairy-like sounds along with sweeping classical instruments on occasion, her music easily ushers listeners inside her world.

Fracciones is composed of tracks recorded between 2007 and 2009. It features a traditional Chilean carol as well as a Mars Volta cover.

Even if you may not be familiar with the language she’s using, La Monine makes certain that her music is enough to communicate her emotions through. There’s something utterly mysterious about her sound that easily captures the listener’s attention.

Her exotic and divine voice adds to the emotion she attempts to convey with her sound. Opening single, Alma is a beautiful acoustic cut that highlights La Monine’s vocals. Accompanied with deft guitar plucking, the song exudes a sexy and sometimes forlorn feeling.

Meanwhile, her cover of The Mars Volta track, Asilos Magdalena doesn’t stray far from the original but she brings in a sense of fantasy and deeper vocals to the cut which I think suits the track gorgeously.  Confesión is another single to check out as well as Luna Temprana.

Fracciones is a gorgeous compilation. Personally, I think La Monine puts her best foot forward in the acoustic tracks she makes. Her voice deserves to take center stage and gets more exposure that way rather than being enveloped in layers of synth and distortion. Nevertheless, the record is worth checking out. Grab it for a free download.