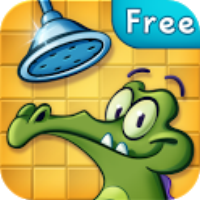 Where’s My Water from Disney is an exciting physics based puzzle game. Your objective is to route water for an alligator named Swampy. The game is notable not just because Swampy is Disney’s first original character for mobile phones, but because it’s really good. Swampy the alligator hates being dirty, so you need to give him regular baths, but it’s easier said than done.

Giving Swampy a bath isn’t as easy as it seems, because another alligator, Cranky, messes up the waters flowing in the sewers where they live. Your goal is to dig up the dirt (by touching the screen) and making sure the water flows into Swampy’s tub.

In some cases you need to redirect the water and flow it into other pipes or other systems, so it can set a route for the inlet hooked up to Swampy’s tub. Once Swampy’s tub gets the required amount of water, you’ll move on to the next level.

Where’s My Water is also filled with lots of rubber ducks that are capable of absorbing water, plus there are numerous hidden items can be unlocked. If you find these, you’ll be able to play in the bonus levels.

Adding to the fun and challenge are the hazards in the game that you need to get rid of (i.e., algae, which is bad for water). Other contaminants like ooze, poison and mud must also be removed, adding a greater level of complexity to the game.

There is a paid version of Where’s My Water, but the free version has lot of levels that you can explore, plus you can unlock other hidden secret levels. This is a fun game, not just for kids but also for adults.