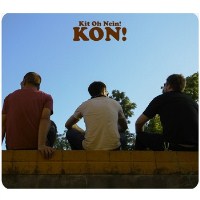 Feel-good psych punk with a touch of indie rock is one way to describe Kit Oh Nein!’s music. The three piece band hails from Detroit/NYC and seems to know their way around the sound.

Led by frontman Ryan Milligan from The Hotwalls, KON! (an acronym of the band’s name) is the group’s debut record. The album contains 10 tracks that run circles around punk, pop, and psychedelic indie rock.

Enveloped in raw energy as well as a hazy indie rock club vibe, it’s hard to believe the entire set of tracks were recorded in only 3 days. This is one of those debut albums worth checking out if you like dirty, cerebral indie punk rock.Â

At times resonating like MUSE, the band combines spacey sounds with murky guitars and shouty, sometimes incoherent vocals. This doesn’t diminish the allure though, in fact, all of the elements come together to create their one-of-a-kind sound.

Opening the album is the super catchy, Cloud Nein. Perhaps one of the best tracks in the album, the single sounds off The Kinks‘ garage pop sound in places. Meanwhile, you’ll find tracks like, Octavia, to be a bit more new wave influenced; playing heavily on distortion and louder instruments in general. Ponzi, on the other hand, sounds like a whole range of noises and inarticulate singing but coupled with a good beat while the last song, Cheater, is an upbeat single that you could imagine The Strokes playing.

KON! was released back in December 2011 and despite being new, the band seems to have a good grasp of their chosen niche. Whether you like jangly guitars and warbled vocals or not, there’s no doubt you’ll probably enjoy this one. Kit Oh Nein! has a knack for creating likable songs even if you have no clue where it’s heading or even where it’s from. Worth checking out if you ask me.