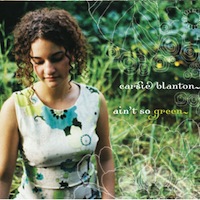 Based in New Orleans, Carsie has made a name for herself touring with Shawn Colvin, Joan Osborne, The Weepies, and Loudon Wainwright III, among others. Though many may describe Carsie’s sound as folk or jazz, the artist categorizes her music as American pop.

Released in 2005, Ain’t So Green features 12 hefty tracks that set that stage to the singer’s career. First stop is Promise, a well-polished song laced with saccharine strings and Carsie’s clean, sugary delivery.

Anything At All follows with a funky attitude. Lively saxophone solos add a jazzy flair to the track. A heart-melting melody, Ain’t So Green wears and tears your heart with well-written, wistful lines.

Playing with acoustic strings, Take Me Along! is an easy-listening track that’s too good to be left unheard. While Lovesick is an ideal lounge song with sultry harmonies over guitars and drums.

Carsie closes the album with stripped down strings. Redemption Blues paints a solitary image of self reflection and letting go. Subtle yet powerful, it’s a perfect way for the singer to sign off.

There is no denying on the talent of Carsie Blanton‘s in both songwriting and performing, and this album’s radio-polished tracks prove it.