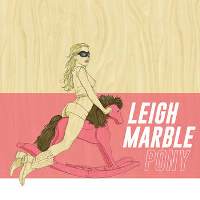 Plunge in some dark folk rock from Portland, Oregon’s favorite artist, Leigh Marble. Released November last year, Pony is a four-track EP that keeps the fire burning for Marble’s musical brand after his successful release of his full-length album Where The Knives Meet Between The Rows.

Minutes into the title track Pony gives us an idea about the artist’s taste for whimsical and dark musings. In this opening piece, Marble treats the listeners with a solid arrangement of folk rock with strong undertones of thick, grungy guitars. The husky, rough vocals also adds texture to the piece and edge—a nice kick to attract new ears.

Following is a dirgy version of John Cougar Mellencamp’s Americana classic Cherry Bomb. Bask in smooth, flowing strings and vapid yet soulful delivery. From a lyrical standpoint, this song’s heartfelt lines use their “rawness” to share to the listeners a piece of the singer’s most cherished memories.

In Nail (Mary’s Chain Remix), Marble successfully attempts to mold his sound with the beauty of silent moments. The low, unhurried arrangement gives way to a few pauses where the artist’s melodies harmonizes with the dramatic silence. Additionally, the lines are well-written as it paints a whole, vivid picture of what the song is all about.

The EP closes with the first rehearsal version of Pony. This version sticks more to Marble’s roots of folk as fun beats evokes a brighter and softer vibe. Giving two approaches into one track was quite a treat because it gives the listeners a chance to appreciate a track in a different light.

Pony EP serves as a useful warm-up course that will satisfy folk rock fans. Leigh Marble enlivens and teases our taste buds without serving everything up. After listening to this, we could not way to listen what he has in store for us.