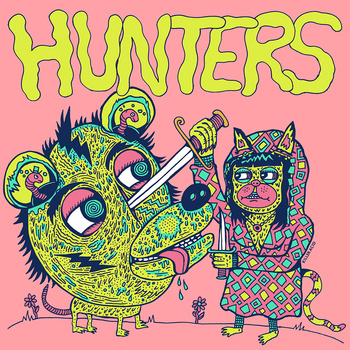 For fans of shoegaze who are looking to add a new artist to your roster of playlist regulars, Hunters’ Drown can be a great addition. This three-track album composed of demos displays the fevered music of these Brooklyn natives. Composed of Isabel Almeida on vocals, Derek Watson on guitars, Thomas Martin on bass, and Gregg Giuffre on drums, the band has captured the attention of rock legend James Iha (Smashing Pumpkins, A Perfect Circle, Tinted Windows) who now works as the band’s producer.

The first track, Drown, begins with a chug of the guitars that opens up to accommodate Almeida’s fuzzy vocals. Almeida and Watson, a real-life couple, bank on their connection as the energy of the song goes back and forth from the both of them. Upon hearing the track, one can imagine just what James Iha was talking about when he said that watching Hunters for the first time has “lit something inside” of him.

New Spells, the last track, has a certain rawness and aggressiveness to it. The song opens up with a catchy melody and manages to maintain a good structure all throughout the 2:37 long track. It is the grungy fuzz guitars coupled with the almost unintelligible vocals that make Hunters true to the form of other shoegaze bands out there.

After listening to this album, one can get a sense of what Hunters can offer given the chance to record on a much-wider scale. As long as they have artistic guidance from the likes of James Iha and the dynamic relationship between Almeida and Watson, we will surely be hearing a lot from this band in the future.