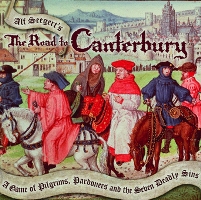 Before JK Rowling became one of the greatest storytellers of the world, there was a fellow from Great Britain named Geoffrey Chaucer who told a couple of tales and found his rightful place in the world of literature. Created in the 14th century, his tales gave a reflection of his times. So if you want to know what knights were really like, among many other things, join the travel to Canterbury!

Chaucer wittingly finds his voice in two ways. The first one is through the narrator–also belonging to the group–who gives the readers a profile check of the other pilgrims through vivid descriptions–from their clothing and more. Judging a person by one’s appearance seems valid for the purpose of the story. The second way is through his characters, who Chaucer made to be interesting mix, telling their own stories. In these ways, Chaucer displays his keen and satirical observations of his times as well as his creativity–both of which are represented by the rich use of the language.

Whether chivalry and courtly romance are dead or not today, they sure were at their peak during Chaucer’s time. Read about what knights would do for their ladies and what they would encounter during their adventures. Know more about how a lady would use her sexuality to get what she wanted during the Middle Ages. Question the characters of the Monk, the Friar, the Pardoner, and their roles in the corrupt institution that is the Church.

Flying brooms and magical wands aren’t just the best products out of the United Kingdom.