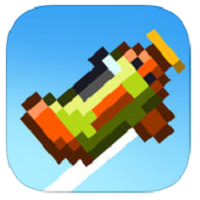 At first glance, Retry from Rovio looks like a Flappy Bird game, but while there are some similarities, it stands out on its own. In this physics based game your objective is to fly a plane from start to finish, and as you might expect it isn’t going to be easy. However, it’s still a lot of fun.

Retry is a well-polished game, and you’ll definitely keep retrying to get the plane to the finish. You can unlock checkpoints, and the game monitors the amount of tries needed to finish a level as well as the distance.

The control mechanism is pretty simple with a single tap and hold used to fly your plane forward and up. If you hold, your plane spins in circles. What makes flying the plane hard is that it incorporates physics, so this isn’t like what you’d get in other games. You’ll need to learn about diving, stalling, and get the weight concentrated forwards.

Retry is a difficult game because the plane is hard to handle, but it’s not impossible or unfairly hard. It just means that you need to invest time to learn it. Because the system is based on real physics, understanding and patience are required. And that’s what makes Retry addictive as you’ll want to try again and again.

Retry looks like a simple game, but the level of complexity is surprisingly high, and it will challenge you. However, the design levels are fair enough, and it’s very rewarding when you finish a level. If you like physics-based games, then give this a try.