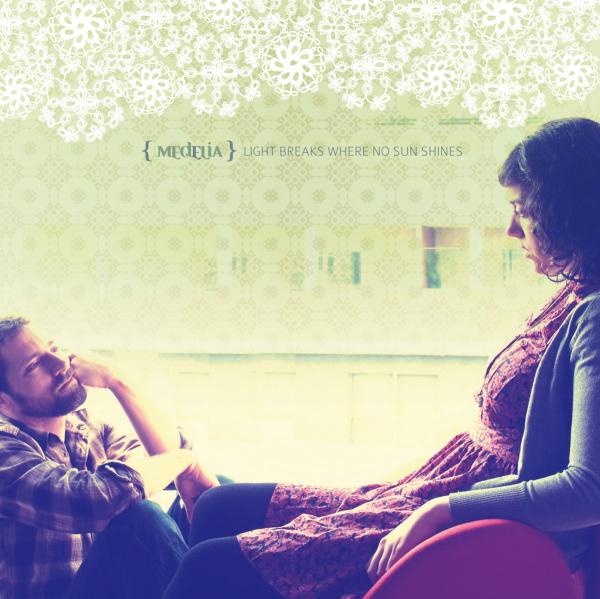 Straight from the heart of Madrid, Spain comes a timeless sound of two beautifully intertwined vocal lines, mesmerizing melodies full of rich acoustic guitars, violin, keyboards, bass, added drums, and the magical softness that only comes with the best of indie music.

Light Breaks Where No Sun Shines by Medelia is said to create a unique place somewhere halfway between the world of literature and the world of music. It started in the late 2009 as a project of Elia Medel and Pablo Maqueda who teamed up with Pablo Oliva (keyboards), JosĂ© Luis Luna (bass), Luis de Diego (drums), and Heidi Buffington (violin) to bring us their very first, self-produced EP.

With a title taking us straight to the verse from one of the works of English poet Dylan Thomas, the EP is a combination of five wonderfully crafted tracks, seamlessly moving between classic folk and pop. Since it’s initial release in 2009, the album certainly did not come unnoticed. During the first half of June 2010 two of the five songs from the EP have appeared on the TV show House and turned Medelia into a semi-finalist of the Project Demo from Radio 3, among many raving reviews from the online community.

Some things, just like some people, simply don’t go well together; fortunately you won’t find such disconnected chemistry floating around in this release as each song showcases beautiful harmony between both, Pablo Medel and Elia Maqueda. From the strong acoustic guitar and folk influenced breeze of the first track, to the wonderful lyrics and playful vocals in Take Me Down, softness and charming pop sounds of Tick Tock, to the dreamlike world of So, Please, the EP has something special for all indie lovers.

Overall Light Breaks Where No Sun Shines is a great first self-released musical adventure from Medelia. Licensed under Creative Commons, ever since it’s initial creation, the album is offered as a free download to anyone in need for some true indie pop inspiration.