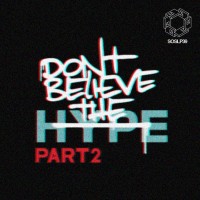 Back with a great collection of music in tow, Sostanze Records is releasing their big follow up to their successful compilation album, Don’t Believe The Hype.

Don’t Believe The Hype Pt. 2 contains the same energy and great selection of tracks like its successful predecessor.

Sostanze Records is an online netlabel that specializes in giving electro drum and bass/visual artists a chance to share their work. Everything they do is under a Creative Commons license and offered for free download.

The album contains 6 great tracks from Sostanze artists like Bebop, The Additive, Flux, Ilkobra, Nezoomie and Brokenspud. Kicking off the party is a single from Tony Buzzerio aka. The Additive. Sentient Beings is a great fusion of elemental beats; sounding off a moderate party vibe the moment you put it on.

Meanwhile, Fresh Meat from Flux, features odd beats to form a synergy of sound that would echo beautifully on any club dancefloor. Flux is an Italian drum and beats master that has several releases under his name. He’s also contributed various singles in different compilation records.

Brokenspud finishes the compilation with a fast-paced techno drumfest/X-files sounding  mix in The Dry Will Come. Manuel Sabatino, also known as Brokenspud, creates sound that’s described as “dirty” neuro-funk/punk a mix of electro and drum and bass. “

The album is one of those records you can leave on playing without much worry. Each track has its own signature touch, proving that the artists definitely know their craft. This might seem like all praise but it’s definitely a nice electro/drum & beat compilation that shouldn’t be missed. Grab the download and enjoy!