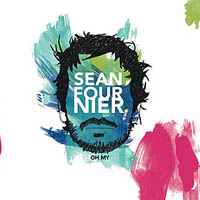 This is Sean Fournier’s fourth release. ‘Oh My’ is a six-track album featuring newly re-recorded songs from previous albums (‘Put the World On Stop’ & ‘Paper Tiger’). This one was created to be 100% FREE. Sean encourages his listeners to download it, share it, give it friends or family – everything to “spread it like a plague”.

I rarely come across an artist that has me from the first song. I have played those 6 songs over and over now for about an hour now and I am starting to sing along now too! Their folk/pop mixture of great lyrics, soft voice and simple sounds make his songs unbelievably uplifting and enjoyable.

Sean Fournier wants his music to be “Spread like the plague”, he wants you to Share, Rinse and repeat, that’s why he’s agreed to have the FrostClick team to distribute his music as a featured torrent on the FrostWire’s Welcome Screen, a new Feature of FrostWire 4.17 which had been undergoing some tests, but which is now ready to help all the musicians, and content owners that are willing to share their media for free on the FrostWire network.

Sean Fournier’s “Oh My” is the first free album download to be featured on FrostWire’s Welcome Screen.

Torrent Recommendations like this one can help spread content on the p2p network fairly quickly. Within minutes of featuring the download, over a 100 seeds were already sharing the album for other’s to try Sean’s music. In addition, FrostWire automatically shares the downloaded files in Gnutella, so now any Gnutella client can find Sean’s music via keyword search.

Tell us what you think about Sean’s Album.

Update (12/1/2008):
Sean’s album was featured on FrostWire’s welcome screen, in only 4 days, over 29,000 people shared his album moving around 750Gb of data on the FrostWire/Bittorrent network. Currently his album is no longer featured on the welcome screen but there are still about 700 seeds, and 48 people are downloading it simultaneously.

Thanks to Sean for believing in P2P, he’s mentioned a spike on his website ever since the album was shared on P2P.

If you are a content creator with something worth sharing to the world, please stay tuned, we’re creating a page to formally receive sharing requests.