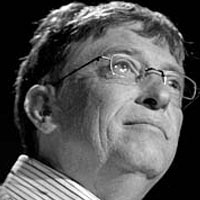 Bill Gates hopes to solve some of the world’s biggest problems using a new kind of philanthropy. In a passionate and, yes, funny 18 minutes, he asks us to consider two big questions and how we might answer them. (And see the Q&A on the TED Blog.

A passionate techie and a shrewd businessman, Bill Gates changed the world once, while leading Microsoft to dizzying success. He plans to do it again with his very own style of philanthropy

Bill Gates is founder and former CEO of Microsoft. A geek icon, tech visionary and business trailblazer, Gates’ leadership — fueled by his long-held dream that millions might realize their potential through great software — made Microsoft a personal computing powerhouse and a trendsetter in the Internet dawn. Whether you’re a suit, chef, quant, artist, media maven, nurse or gamer, you’ve probably used a Microsoft product today.

In summer of 2008, Gates left his day-to-day role with Microsoft to focus on philanthropy. Holding that all lives have equal value (no matter where they’re being lived), the Bill and Melinda Gates Foundation has now donated staggering sums to HIV/AIDS programs, libraries, agriculture research and disaster relief — and offered vital guidance and creative funding to programs in global health and education. Gates believes his tech-centric strategy for giving will prove the killer app of planet Earth’s next big upgrade.

“When Gates looks at the world, a world in which millions of preventable deaths occur each year, he sees an irrational, inefficient, broken system, an application that needs to be debugged. It shocks him — his word — that people don’t see this, the same way it shocked him that nobody but he and [Paul] Allen saw the microchip for what it was.” — Time

Related Links:
This Talk on TED.com
Bill Gates Bio on TED.com
This TED Talk on LegalTorrents.com