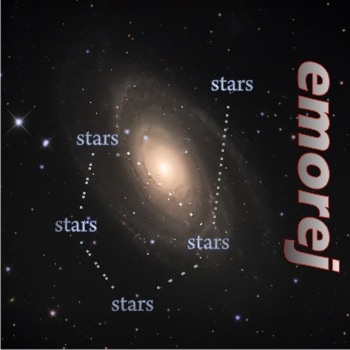 Electric music is not always weird-sounding – there are actually some talented artists who can fuse electric music and make it into something that’s quite chill-sounding. Take Emorej as a perfect example; he uses his musical skills to make electric music very melodic & pleasant to the ears. Thus, the album entitled Stars.
Stars has a total of 11 tracks which is a perfect companion for cool nights while you wait for another meteor shower or for a simple picnic right under the stars.

Fusing different genres together, Emorej as an artist is as intriguing as Emorej as a name. His name, as we all assume, is a backwards version of the name Jerome. He dubs himself as a ‘one-man band’, which is not very surprising – considering the fact that he does his music all by himself. Hailing from the islands of the Philippines, Emorej was also known as God of Plague, which partly explains his love for music and his ability to fuse everything together.

His songs might sound very experimental, but they are very easy to appreciate. He pairs his electronic music with a hypnotizing and seductive woman’s voice, and a deep man’s voice, providing a nice balance between the funky electric music with ethereal voices.

Aside from Stars, he has dozens of other songs – each one written by him. For somebody who edits, records, and play each instrument, he must have put a lot of effort – and passion – to every track.

A personal favorite from this album would be The Storm. It has a very nice melody and an easy piano accompaniment. Match that up with a cool woman’s voice with lots of reverb and echo, and you’ve got yourself immersed in a different world as you type in front of your computer. If you want something more upbeat, try listening to Clink, which strongly resembles a nice afternoon playing in a game console.

Stars is available as a free download, or as a ‘name your price’ album download. Go ahead and download – and you’d be saying clink, clink the next morning.

This work is licensed under a Creative Commons Attribution-Noncommercial-No Derivative Works 3.0 Unported License and is available as a free download on BandCamp.