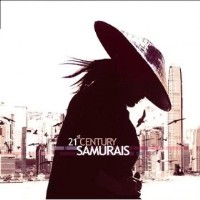 Swiss French rockers that don’t sound European at all. Victori4 (can be read as Victoria or Victory Four) likes to describe their sound as cinematic indie rock. There’s not much to disagree about that description since the band’s songs definitely sound as if they belong in some indie rock film or TV show.

It might be a stretch, but 21st Century Samurais have one of the best albums available for free in Jamendo. Their brand of indie alternative rock might not break boundaries but it is refreshing and awesome. Worth every penny if you buy the album on iTunes or Amazon too.

Although it might sound as if I’m praising the band too much, the truth is that Victori4’s brand of alternative rock is pretty darn good. The moment I heard the first track, it’s hard to deny that the band has something special.

21st Century Samurais has enough hooks to catch you and make you want to listen to it every time. Tracks like Love Machine Highway, with its long but beautiful instrumental melodies and ambient feel, makes you think twice about labeling the band as a punk alternative outfit. Nobody Said is an upbeat and very catchy opener. The vocals are pretty solid and so are the instrument work.

Victori4 started off in 2006 during their high school year. Even though they are relatively babies in music world years, they have managed to tour the world and perform in various stages. The group is made up of Aurel Rubod, Thomas Molinas, Simon Molinas and Antoine Marmoux.

This work is licensed under a Creative Commons Attribution-NonCommercial-ShareAlike 2.0 Generic License.