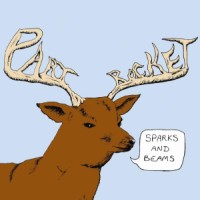 The closest to an instrumental “summer pop” record you will ever get. Part Rocket makes you wish it was summer all the time. Sparks and Beams is a four track EP that creates the perfect compliment to beautiful summer days at the beach and those interesting summer nights.

Comprised of a lot of band members, Part Rocket has had rave reviews for their work, including being described by Quench Magazine as “impressively diverse… combines industrial, emo and prog influences to great effect, creating something entirely of their own.” Originally from Cardiff, the members of Part Rocket have made London their main hub for making music. Sparks and Beams is their latest record and is available for free download online. The band released the compilation along with their other EPs, “In Limine” and “Kneel Before the Throne and Drink the Blood of Your Own.”

Part Rocket has definitely succeeded in creating a very refreshing EP. Sparks and Beams was written in late 2008 and recorded and released the following year. The album is filled with flowing guitar and bass work and interesting drum patterns. Almost all of the songs overflow with a math/rock vibe. It is carefully planned and thought of and the delivery is even more precise.

As for the tracks, “Hey Computer!” is instantly likable, starting off with clashing guitars and drums then carefully hoisting itself into a melodic vibe. On the other hand, “No Slack Battalion” is a soft and melodic track that features blues jazz guitar playing and engaging beats.

There’s no doubt that Part Rocket creates beautiful music and the EP is worth listening to. As of the moment, the band is on break and creating music for what is hopefully, their next awesome release.