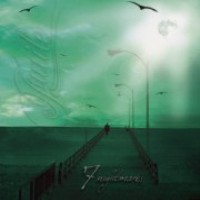 Alternative progressive four piece from Germany. With the influx of generic alternative rock bands, it’s hard to find bands (famous or not) that conform to the norm yet still stand out.

Futile is one of the few bands that can do this. Truth be told, they do sound like just another rock/alternative band on the horizon, but some of their songs are quite good and worth checking out. Think German, slightly unrefined version of Staind, with a little bit more progressive.

By fusing clean vocals with a hard rock alternative edge, Futile creates a marvelous compilation of tracks in 7 nightmares. The band easily creates a mixture of prog rhythms along with melancholic lyrics. Each track has its own little hook which makes it catchy and easy to like. Although the music is not exactly ground breaking, the songs are done nicely and the quality is pretty good.

Some of the tracks that’s worth checking out include “Dance of the Scarecrow,” and “Breathing Fire.” Futile has been around since 2006 and 7 Nightmares is their first official album.  The group is made up of Oliver Reinecke on vocals and guitar; Dominik Schaetzel on guitar; Nico Klettenheimer  on bass; and Patrick Spotka manning the drums.

This album is available for free download under a creative commons license.