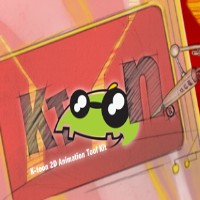 KToon is an efficient 2D animation program that was created by animators designed for use by fellow animators. However, unlike most animation programs, this is entirely offered under a GPL license so aspiring animators can make use of it for free.

The animation tool is still a work in progress so bug fixes and new versions are still being developed. Nevertheless, it already works great for creating your very own 2D animation project. KToon offers plenty of neat features. For one, it has a very intuitive interface. Of course, like any program, there is a learning curve when it comes to using the software. However, this animation toolkit makes it easy to create animation in just 5 simple steps. Moreover, the program contains animation and preview modules as well as some basic items needed for vector illustration.

On the other hand, there are some cons to using the program. Apart from the beta stages of much of the software, there are some users who have complained that it crashes too often. Although this hasn’t happened to me yet. It would be better to just save your work every once in awhile. Also, even though it might be advantageous that KToon offers the possibility of storing a file in flash version; it does this by exporting the animation in bitmap per frame. As a result, you end up with a very huge file which takes up plenty of space.

Despite its disadvantages, Ktoon is a simple and easy to use 2D animation program that would suit both beginners and those with experience quite well.