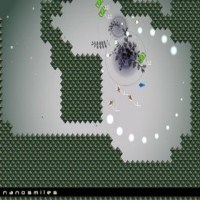 Nanosmiles is not just another arena shooter game. One of the entries for the Tokyo Games Festival, this little shooter game gives player a different approach towards gameplay as well as the control scheme.

In the game, you can use inanimate ships found within your area to target your enemies instead of you attacking directly. It takes a bit of time to get used to this unique style of fighting but once you do get the hang of it, the results are quite interesting.

You control the blue ship. You can move it around and gather your drone ships. If you are ready to attack, hold down Z and then your drones will attack the bad green ships and blast them to oblivion. If you want to make your ship travel faster, press down X. One of the things that you have to be careful though is the fact that your own ship (the blue thingy) is extremely fragile. One hit from enemy fire is all it takes to actually take you down and since you have no weapon onboard, you’re going to have to be good at dodging to get away from the onslaught. On the other hand, if your subordinate ship gets hit, they only turn gray meaning they are no longer under your control. You can gain control over them again if you move through them but you need to be careful especially if enemies are nearby.

Although the initial levels are quite easy to overcome. The rest of the levels are pretty challenging especially the final one, so make sure to get your game face on while playing Nanosmiles.