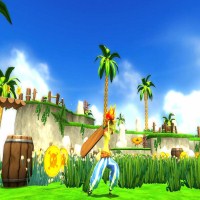 Dash and the Stolen Treasure

Dash and the Stolen Treasure is a cool platformer made by 5 university students, namely, Joel Roset, Josep Catala, Marc Veiga, Marcos Herraiz and Carles Fernandez. All of them are from Spain.

Dash and the Stolen Treasure contains fun gameplay and simple yet entertaining game design. Because of this, it’s hard not to compare it to another classic platformer, Crash Bandicoot. Instead of a sly bandicoot though, you get to play, Dash, a pirate who is afraid of the water for some reason. Even though he’s just a kid, he seems to have collected all sorts of treasure with him.

Unfortunately, his treasure gets stolen by a nasty gang, the Blind Shark Pirates! Our hero then sets off on an adventure to recover his lost treasures, collect coins and exact his revenge.

Just taking a peek at the trailer tells you that this game will be quite fun and interesting. Just like a basic platformer, you set off on your adventure trying to get back your treasure back. On your way, you collect various coins and gems. The game environment allows you to explore and do a lot of things like playing baseball with the octopuses or maybe run over the water. Depending on how much you explore the island, you can extend the game time to more than 25 minutes. There are also various secrets and rewards/achievements to be gained  if you play it right.

Overall, the game gives you a fun 25 minutes or so of gameplay. Be warned though that it’s not perfect. There are bugs here and there but the creators do promise to add some fixes to this. Definitely a fun game and worth the download.