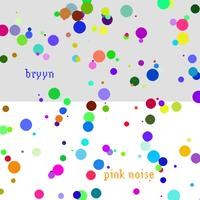 Changing names is quite common in the music business. Hence, it’s no surprise that indie folk pop guru, Pinkle, decided to adopt his real name and drop the “Pinkle” moniker in full. He’s known simply now as, Bryyn.

Taking up his real name as a moniker doesn’t mean he’s no longer creating lovely indie pop music. In fact, the artist still manages to churn out lovely and relaxing music that induces a surge of endorphins down your brain.

Pink Noise is actually an older album. It was released back in the summer of 2008. We’ve also reviewed his newer release “House Plants” here.

This 12 track record features some songs that have shown up in Bryyn’s future releases. When listening to the record, there’s no denying that this album bears a simplicity that is pleasing to the ears. It’s this beautiful laid-back sound that has made the artist’s songs so endearing.

Pink Noise opens up with the upbeat pop track, Fractals. This was also included in Bryyn’s latest album, House Plants. It’s a funky pop track that features a catchy beat and beautiful vocals. The lyrics are also lovely, adding another dimension to the cut. It’s this mixture of sounds, vocal work and melody that makes songs from this artist quite memorable.

On the other hand, Morning Sunshine, is a pop acoustic gem that serves as the perfect morning greeter. Bryyn’s playful wordplay is enjoyable and gorgeously matches his sweet vocals. This is one of my favorites in this compilation and it’s not really hard to understand why. Other cuts worth listening to include the reflective, You Know, as well as the inspiring, Into the Ark which is also included in Bryyn’s latest album.

Go ahead and check out this wonderful record today. It’s definitely a great download.