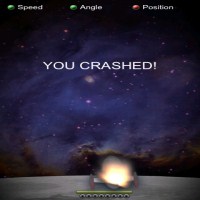 Ever wonder what it must be like to drive and land your own spaceship? What controls do you need to use? Is the physics behind it all that difficult? Well, download Crash Landing and you might just find out how challenging it is to land your own space craft.

The game was created by Marketwall.com and was first released about 3 years ago. The game gives players a chance to experience manipulating their own space shuttle where the objective is to land their spacecraft upright without crashing.

If you’re up for a challenge (and trust me, you’ll get plenty of it  here) then give this one a download.

Who knew getting a ship to land upright without crashing can be so difficult? Crash Landing offers you a chance to experience this, albeit with modified controls using your iPhone or iPad, of course. You need to carefully tilt their gadget up and down in order to gain some control on thrust and speed. Tilting left and right gives players control over the angle and position of the ship.

Landing your ship onto the platform means you have to be precise. If you run out of fuel, you’ll immediately drop and crash. If you get frustrated and want to try again, tapping the screen lets you start on a new game.

Although it may seem boring, the fact that it’s difficult to get the physics right is part of the allure. It’s not advisable for anybody who gets easily frustrated though because trust me, you’ll have trouble getting it right. Others who have an innate gift of balance and precision might not find any challenge in this game. However, if you’re one of the normal people and a bit of a perfectionist then this game might prove quite entertaining. See how many tries it’ll take you until you get it right.