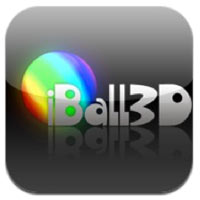 iBall3D is actually the latest remake of the old classic game, Labyrinth. Instead of the old graphics, you get an updated gameplay and the game in full 3D. Gameplay is similar though; you need to guide a ball from one point of the map to another.

The game was created by Stone Trip, and it features great graphics as well as excellent gameplay that will get players hooked into playing it. The perfect combination of puzzle solving and agility will ultimately help you to win this game.

iBall3D works on the iPad, iPhone and iPod Touch. It’s also available as a free download right under the Mac App Store.As mentioned, gameplay is a no brainer. All you have to do is maneuver a ball around a maze and reach the goal. iBall 3D was designed using Shiva, a 3D authoring tool that works with different platforms. Graphics for the game are pretty good, although I think some parts need fine tuning; it still impresses nonetheless.

Physics for the game is functional. Although the ball does seem to drop a little too heavy. It’s perfect for controls but is a far cry from achieving a realistic feel. One cool thing though is that you can upload your final score onto the iBall 3D server. It gives you a chance to check out your world ranking if you’re the competitive type.

Overall, the game is a bit short at 9 challenges but its still quite entertaining.