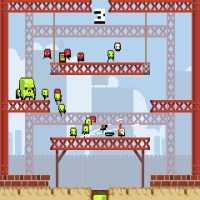 Super Crate Box is one piece of arcade marvel that you’ll either absolutely love or absolutely hate. If you hate 8-bit pixel art or retro, shallow gaming; then you might want to steer clear. However, if you have always fantasized reliving the wonderful times when players played video games just to have their names emblazoned onto that shiny and shimmery ‘Top Score” list; then this game will be your best friend for a good while.

You have two goals in this game. First, to not get killed and second, collect as many weapons by getting crate boxes, before you eventually get killed.

Developers for the game relied on the premise that those 80s and 90s video games, where your objective was simply to hit the top score, were actually really fun. And judging from how addictive this game is, they seem to have hit paydirt. The game was created by Dutch game outfit, Vlambeer, and was an entry to IGF 2010. The game has gone a long way since then. Currently, it’s held by many gamers (and even game developers) to be one of the most entertaining and addictive indie game around. It has even earned a spot in Gamasutra’s Best of 2010: Top 10 Indie Games list.

Super Crate Box is a retro arcade platformer where your main goal is to collect crates  and not get killed. Basically, when you get to a crate, you get weapons and other goodies. You can even unlock other playable characters. With your weapons, you’re going to have to blast your way through enemies until you can’t stand it any longer.  Of course, you can’t choose what type of weapon the crate will give you and it gets quite sticky when you do end up with one of the least powerful ones.

To make it worse, your enemy keeps falling from the sky. You constantly have to balance yourself from getting to the crate and shooting off the enemies before they fall into a fiery pit at the bottom. Once you fail to kill them and they do fall into the pit, they re-spawn; more stronger and faster than they were.

The good thing though is when you do hit the jackpot; you can get weapons that can easily wipe out the enemy. Sure, you get the typical magnum and flame throwers, but you also get  cool energy disk blade thingy that can kill everything in its path. You can even pretend to be a samurai with your katana or even go the war freak route with the grenade launcher. An insanely cool game with fun graphics, awesome sound and fantastic gameplay. Definitely worth checking out.