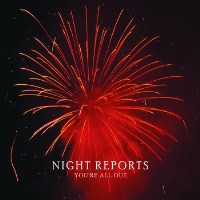 Night Reports: You’re All Out

Another band that you wouldn’t think is composed of only two people at the helm; Night Reports create beautiful indie rock music with a touch of soul.

Long time friends, Derrick Brown and Beau Jennings, have both collaborated in various projects before. However, they’ve never tackled anything similar to Night Reports. Although the collaboration started out slowly, with both of them passing MP3s and recorded files via email and voice message; they eventually compiled what has become You’re All Out.

The record is a concept album of sorts, as it revolves around an athlete who is down in the dumps and living (and reliving) his life in his glory days.

You’re All Out is one of those records you can pop into your player if you’re feeling a little moody and want the perfect music to keep you company. It’s somber and a bit melancholic yet filled with beautiful stories that can serve as your lullaby.

Opener, Are You On My Team? is a solemn little cut that comes with sad vocals and wonderful piano work. It’s one of the most likable tracks on the record and after hearing it once, you’d be looking forward to hearing it again once you finish the entire album. French Kicks (World Music is the Real Criminal) changes pace and adds a slightly upbeat tempo to the mix. The song is filled with a catchy chorus, occasional handclaps and an overall happier atmosphere.

Meanwhile, Hang On Me Darlin’ features a collaboration with songstress Samantha Crain and her hypnotic, quirky vocals. The song is a 3 minute stunner that gently weaves between a piano ballad to an indie melancholic love song. You Were My Pete Rose is a haunting love song that features Derrick’s expressive vocals cooing and silently urging his “sweetness” to return to him.

Overall, if you love the likes of Damien Rice, then you’ll have plenty of lovin’ for this record. It’s an album that masterfully combines hauntingly melodic folk music with that of slightly uptempo indie rock. Definitely makes a great balance. Check it out!