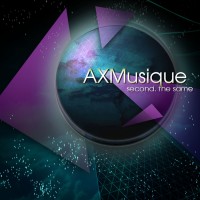 AXMusique are two producers from Poland; on stage, however, they are three: vocals, programming and drums. With already three releases under the watchful eye of Brennessel Netlabel, Second. The same., their second album, oscillates between the genres filling it’s fans with block rockin’ electro and distorted guitars packed into a pop scheme full of powerful vocal parts.

So if what you are looking for is a danceable electro pop rock album with lots of catchy refrains, look no further.

AXMusique’s first self-titled album, also released with the help of the fantastic Brennnessel Netlabel, is a micro minimal, funk influenced treat for any electronic music lover; especially as the deep minimal and abstract grooves played an important role in it’s production.

With Second. The same., however, the two producers have decided to venture deeper into the world of pop by adding more vocals, catchier refrains and distorted guitars. All of the tracks are also accompanied by the dominant synths creating a truly unique atmosphere.

The track Insipid is a great and well structured opener for the album. Starting with some powerful rock drums, it is followed by a solo guitar and, shortly after, the male vocals that will sing into your ears well after the song itself is over. On the other hand, Somewhere something leaves the guitar behind and lets the synths fully take over. It’s parallel to the drums bass lines will also make you feel like dancing while a wide refrain will leave the track complete.

All in all, if you like good electronic music you should make sure that AXMusique finds it’s way into one of your playlists.

The album is certainly filled with energy and is powerful enough to wake up your neighbors’ sleeping dogs; Rock’n’roll teleported to the 21st century. Download it and enjoy this high quality release from Poland. You will not regret.

This work is licensed under a Creative Commons Attribution-NonCommercial-NoDerivs 2.5 Poland License.