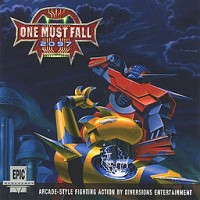 Time to gear up and take up a fight – true street-fighter style. One Must Fall:2097 takes the name very, and we mean very seriously. The game is a combat-oriented computer treat programmed by Diversions Entertainment.

Published by Epic MegaGames, the game is really nice to play and has a very old-school feeling to it, making it worthy for a place on your desktop.

The game was initially brought to the public in a Beta version on May 18, 1993 with a full version released just a year later by Epic MegaGames. Unlike the typical combat games, One Must Fall:2097 centers around Human Assisted Robots (H.A.R). The H.A.Rs are piloted through a physical and mental link to the human pilots; something that is never shown on the screen and neither does it affect the gameplay in any measure. There is an option to choose between 11 different H.A.Rs with their own attributes and fighting styles.

The surroundings are also very realistic, so every arena contains some kind of danger. For example, one arena sports spikes that pierce through the walls and can easily bring more than just heavy damage to the robot. Another arena has a floating sphere, which can trigger a fireball from the floor under the opponent.

There is an eleventh H.A.R in the game known as NOVA, which features in the final battle story mode and can be used in-game only in the Tournament mode or through a special cheat which unlocks it instantaneously. Each H.A.R in the game features three special attacks, only NOVA and SHADOW have four special attacks. Accompanied with a “scrap” and “destruction” move that helps in earning bonus points and in some rare cases, unlock secrets.

Overall, a great combat game with a twist. If you loved Tekken, Mortal Combat and the Street Fighter likes, One Must Fall:2097 will really be your favorite in the coming days.