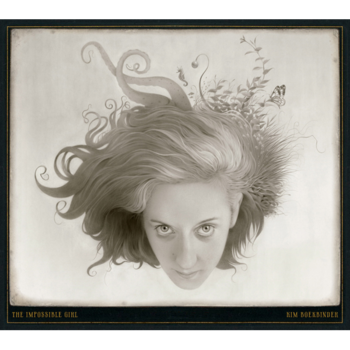 Listening to Kim Boekbinder reminds me of a young Kate Bush – playful and electrifying.

A performer, composer, musician and visual artist rolled into one, the Canadian-born singer lives up to the title of her full-debut album Impossible Girl. Released last December 2010, the 17-track collection had already garnered prominence among famous music fans including Amanda Palmer, Neil Gaiman and Rosanne Cash, to name a few.

Rhythmic clapping and echo-like vocals opens up with The Impossible Girl #1. This highly infectious song sets the mood of the album: quirky, experimental and definitely original.

Rainbow and Unicorns tones down the energy with slow, thick electric guitars. It’s an emotionally rich song with heart-peeling lyrics such as “I want you to break my heart to save me, I want you to crush my dreams ’cause it’ll mean that I had some”.

With gentle low keys and sweet melodies, More and More is too cute to put in a charm bracelet. This almost-lullaby is quite similar to the songs of the lovely Regina Spektor but still retains its own unique beauty.

Open/Avocado flutters down with layers over layers of ambient electric tunes. If you listen closely to the song, you’ll be amazed how Boekbinder tried to imitate the sound of wind chimes dancing in the air.

One of the standout tracks, however, has to be Sex, Drugs, & Nuclear Physics. At this point in the album, I am already at awe on the singer’s versatility. From slow and electronic she suddenly shifts to a pure country vibe without any hesitations.

The album closes up in an edgy acoustic tune with Anyone at All. Boekbinder leaves her listeners with a perfectly conceived and melancholically delivered song.

Rarely can you discover an album so creative you can’t categorize it into one genre. Impossible Girl is a melting pot of Kim Boekbinder‘s stellar talent, musical knowledge and braveness to break boundaries. This is definitely someone to watch out for.