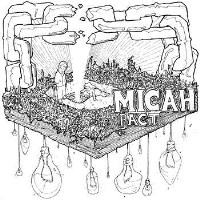 Simple yet captivating. That’s one sentence that would best describe Taryn Leia Precott’s sound. Her soulful voice is what captures the listeners attention while her skillful and melodic music creates a beautiful playground for her lyrics.

The Micah Pact is a 7-track EP that the artist wrote over a period of years. It’s a collection of tracks that expresses the artists’ reaction as she grapples“with suffering, both my own and others’. Divorce, fatherlessness, loneliness, broken families, disease, poverty, untimely death….”  The album is an answer of sorts and a way of understanding and coping as well.

Accompanied with Tara’s hypnotic vocals, the songs from The Micah Pact come alive. This EP is actually the third installment of her 2011 releases. According to the singer’s website, the album name is a “double entendre. It names her younger brother Micah and the orphans at the PACT (Project for AIDS Care & Training) Hospice in Chennai, to whom the songs are dedicated.

All the songs have that indie acoustic folk flair that’s so easy to listen to. From the moment you hear that jaunty tune in, Ordinary Life and hear Taryn’s beautiful voice, you’ll easily understand why this singer is worth checking out. In fact, for this cut, her vocal work reminds me of another talented indie artist that was also featured here in Frostclick: Frau.

Although her upbeat acoustic pop is quite good, Taryn excels in delivering quiet, melodic tracks which exudes beautiful emotion. Take a listen to Ben Oni and In-Between Road, to hear what I mean. Her songs not only express her thoughts but it also showcases her Christian faith.

Overall, you get an album that’s solid from beginning to end. It doesn’t have bells and whistles but it’s a record that emanates with sincerity and honesty. Basically perfect for moments when you just need some good music to wind down your hectic day. Donate or grab this download for free. Make sure to check out her other releases as well.