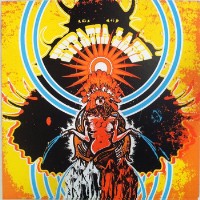 It’s easy to spot which iconic rock band has inspired much of Hypatia Lake’s’ sound. From the magnificent dirty guitars, those shouty vocals and a dark, sinister vibe; Ouraboros channels quite a bit of Sabbath and Led Zeppelin in its tracks.

Hailing from Seattle, Ouroboros is the fourth record from the crew. It’s a concept album of sorts as the band has created unique tracks that revolve around the epic battles and excursion of protagonist, Rose Marie.

Serving as a nice throwback to 70s rock and expansive concept records, the album flourishes and entices listeners to enter into its sonic landscape.

The record is dark, stirring and quite enjoyable if you like getting lost in a sea of drums, guitars and rich fuzzy vocals.

Star Eater opens with a deep bass line and expands with those recognizable vocals. Failing to recognize the fact that this sounds like a Sabbath song would be a crime. It’s a great track though and definitely sets the tone for the rest of the compilation. Suicide (will not save you from this darkness that comes for us all), meanwhile, offers elements of the Brit rock touch of The Who.

On the other hand, Prophecy I showcases the quieter, gentler side of the band. Armed with acoustic guitars and spacey vocals, the single resonates with melancholia. The End is the Beginning of the End (Ouroboros) finishes the album in a slow rock tempo with epic guitars and some Robert Plant-style wailing.

Despite sounding like an elaborate cover band, Hypatia Lake is actually pretty good. Personally, I enjoy 70s rock and the progressive concept records during the era hence, Ouroboros gets a nice spot on my playlist. Check it out and see if you want this on your playlist as well.