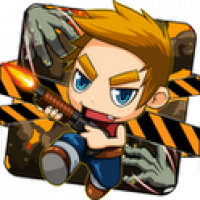 Played around with a lot of ass kicking zombies? Well, this time around fight for survival with zombies the size of Mario. Yes, these zombies are far from intimidating, but they surely are out for a kill and the their meal is none other than you.

Developed by Italy Games, yes the same developer who have given Android their best Bowling and Chess game, Zombie Dash is another masterpiece on the Android market – offered for free. This is one game that is sure to hook users to their device for some casual gaming game.

The game takes 90% cue from the iOS game Jetpack Joyride by Halfbrick Studios, from the power-up methods, obstacles, shooting styles, the zombies, to the main lead. The other 10% that is the original take on the environment. Nonetheless, the developer manages to add a bit of panache to it and make it look more original than it might sound.

In-game, players are given the sole responsibility of saving their city which has been swarmed by brain-dead zombies and fight for survival at the same time. Gameplay is very intuitive and addicting with the inclusion of jump and shoot button equipped on either sides of the screen. Old-time gamer are in for a treat as the game allows for a total Mario like feature, under which players can jump on top of the other zombies eliminating them as well as hitting bricks to get the necessary power-ups.

Overall, this is a great game and a thumbs up is surely deserved by the developer for the awesome mash-up they have cooked up. The scoring point for this game would be the fact that Jetpack Joyride is an iOS exclusive, so Zombie Dash coming to the Android ecosystem just aims at capturing the market ASAP. My personal rating 4.5 out of 5. Happy gaming everyone.