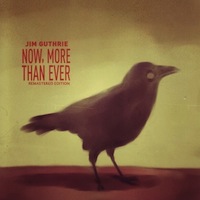 Jim Guthrie’s Remastered Edition of Now, More Than Ever is not far from the original. The poppy electronics of the remastered can be seamlessly juxtaposed to a nostalgic look down memory lane.

The Canadian singer-songwriter has foremost made a name for himself through self-produced cassettes. Having recorded as a solo artist and as a band member of Islands, Royal City, and Human Highway, it can be safely imposed that the original Now, More Than Ever is a great leap in his music career after having been nominated for a Juno Award.

Now, after 10 years and having been remastered from the original 24-bit mixes by Andy Magoffin, the album has fewer hisses that will enhance the audiophile’s listening experience.

The quirky charm of the creator is still apparent, with the songs intricately woven with pop and subtle strums. Also backing him up are the same set of brilliant musicians.

The same impeccable and heavy string tunes in All Gone by Owen Pallett’s violin and Mike Olsen’s Cello. The sparkling banjo vibrations by Bry Webb is still noteworthy in the single Problems with Solutions and through the remastered much more significant.

Evan Clarke’s drums and Simon Osborne’s bass viola also provide the perfect rhythmic beating in So Small, making it more unpretentious as a reflection on humanity.

Finally, the unique woodwind whistles of Laura May Elston’s sax, flute and clarinet combine to create the vividly poetic vibrations of the sound of this album. Jim Guthrie‘s sugary, rich pop deserves all the praise that it previously beheld.

For those with a want of the feel of weekend repose on any given time of day, Guthrie’s digital, 11-track album is your one-way ticket to chill paradise.