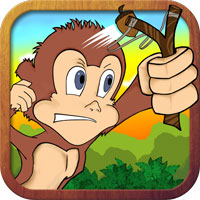 The quality of games on iOS is undoubtedly great and some of them really know how to stand out from other games. The same goes for Pocket Monkey and this is tough competition for a big player like Temple Run.

Pocket Monkey was developed by Game Cell and though they do not have a plethora of apps under-their-belt, this game is a masterpiece in its own right.

Pocket Monkey is a very cool action game, with a heady mix up of fun gameplay. The game is a typical skip & kill enemies concept through the adventurous way to the objective. The coolest feature of the game is that it has all 60 levels unlocked and nothing needs to be purchased to complete it. The game starts with an introduction of a trapped monkey who flees from captivity and finds its way to his lost tribe. Players have to clear the way through some adventurous and risky attacks and traps and complete the levels one by one.

The game is divided into two parts, the first 30 levels is made up of Summer and the next 30 consists of Winter. Once the player clears the Summer stage, then only will the next level be unlocked. On completing each level, players will be awarded with star rating depending on how efficiently and quickly they have done with that particular level.

The gameplay is quite decent with nice graphics that makes even a novice gamer addicted to it. Players have to guide the monkey on its way to the door, which is the end of the level. They have to collect the bananas and nuts on the way that can help in attacking the monsters later on. The controls are intuitive that makes the game very easy to play at the initial stages. However, the traps and enemies are strong as the game advances.

Overall, Pocket Monkey is one hell-of-a-game and really does keep a player hooked to their iOS device. Being a freemium app, it has no lag whatsoever and plays like a dream.