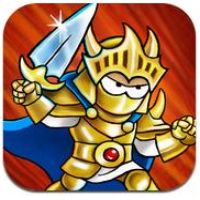 There are lots of endless runner games out there, and One Epic Knight is one of them. But this game from Simutronics is more than just a rip-off of other runners, as it brings something new to the table. In the game you play a knight who is going through a dungeon destroying orcs, smashing obstacles and collecting treasure all at the same time.

What makes One Epic Knight different from other runners is it has elements of combat built in – meaning you can grab swords and shields and slay enemies while getting multipliers. Shields won’t just protect you from enemies but you can use it to smash obstacles in your way.

Aside from running you also have to balance trying to use items for a score multiplier and saving them for use later. Because of this feature there’s more to the game than just trying to run needlessly and avoiding enemies.

As far as control systems and game mechanics go, One Epic Knight is very easy to use. Aside from running, you also have to do some strategizing, and make decisions, and the graphics are also pretty nice.

The graphics and sound are top notch, and there’s a fair amount of challenge here too. One of the things that separates it from other runners is that it uses swipe for lane switching rather than tilting, but you will get used to it in no time.

One Epic Knight has a more than a few in-app purchases, but they aren’t needed to complete the game. While gem packs can be bought, a lot of them can be collected to finish the game. If you like endless runners like Temple Run, you will love this one.