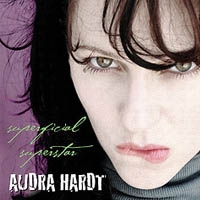 Audra Hardt is a local girl . . . local to Los Angeles & Hollywood, that is.

And the entertainment capital of the world is certainly a great place to play . . . perhaps too great. As a child, Audra did everything to the max; a candle burning at both ends and sometimes in the middle. Rebellious, indulgent, independent, self destructive . . . Everything in the EXTREME. At 15 Audra had an epiphany……….

UPDATE: Audra Hardt’s song “Do it To me” was included on FrostWire FrostClick 2009 Compilation Album Volume 1 celebrating the first 1,000,000 downloads of 2009.

Driven-from-within and encouraged along the way by music industry notables, Audra developed a take no prisoners approach on stage and in life. She’s a fighter and channels life’s loves and heartaches into her songs in ways that both excite and inspire. One of those so inspired was Ray Kurzweil, renowned futurist, entrepreneur, and inventor of music synthesizers, who was smitten by her edginess, vocal strength and incredible ability to combine all of that with a stage presence that commands an audience. A patron and true ‘Audraphile’ for years, Ray underwrote the recording of her first album, “No Disguise”, in 2005. In turn, Audra was his inspiration for ‘Ramona’, a virtual avatar in cyberspace he created as the ‘archetypical female-rock singer’ . . . come to life in Audra Hardt herself. All Audra needed was a ‘kick-ass’ rock band behind her, and now she’s got one.

Audora’s new album ‘Superficial Superstar’ is free for download under the Creative Commons license from jamendo.com.

In 4 days, Audra Hardt’s Superficial Superstar has gotten over 15 thousand downloads. The album is being shared in average by 156 people per hour.

A queue of bands and singers is starting to form. Contact us as soon as you can if you want to be promoted.