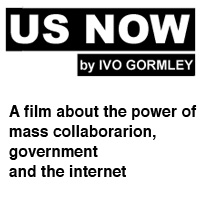 US NOW – A Film about mass collaboration featured on FrostWire

If a million people that never met can come together online and create an encyclopedia as good or better than Britanica’s, What else can we do?
Can technology enable mass collaboration for legislation and government and do away with lobbyists and corrupt politicians?

A film by IVO GORMLEY and Banyak Films, distributed by VODO and FrostWire.

In his student flat in Colchester, Jack Howe is staring intently into his computer screen. He is picking the team for Ebbsfleet United’s FA Trophy Semi-Final match against Aldershot . Around the world 35,000 other fans are doing the same thing, because together, they own and manage the football club. If distributed networks of people can run complex organisations such as football clubs, what else can they do?

Us Now takes a look at how this type of participation could transform the way that countries are governed. It tells the stories of the online networks whose radical self-organising structures threaten to change the fabric of government forever.

Us Now follows the fate of Ebbsfleet United, a football club owned and run by its fans; Zopa, a bank in which everyone is the manager; and Couch Surfing, a vast online network whose members share their homes
with strangers.

The founding principles of these projects — transparency, self-selection, open participation — are coming closer and closer to the mainstream of our social and political lives. Us Now describes this transition and confronts politicians George Osborne and Ed Milliband with the possibilities for participative government as described by Don Tapscott and Clay Shirky amongst others.